The intellectual and spiritual godfather of sound medicine was Pythagoras, the Greek philosopher and mathematician who lived from about 580-500 B.C.E. Pythagoras is credited as the first person to take an organized approach to using music as a healing technique.

Pythagoras also spoke of how sound functions in relationship to the universe. “Each celestial body,” he said, “in fact each and every atom, produces a particular sound on account of its movement, it rhythm or vibration. All these sounds and vibrations form a universal harmony in which each element, while having its own function and character, contributes to the whole.”

Many North American Native tribes share the idea of sound and song as a basis for their creation story.

Tribes of western Canada believes that songs where woven into the “Great Blanket of Earth,” and thereby created the world.

According to The Hopis, Spider-Women created all forms of life on earth, including human beings, and breathed life into them by singing a Creation Song.

The Aborigines, the indigenous people of Australia whose creation stories date back almost 150,000 years, song lies at the very heart of the aboriginal creation myth. Each Totemic ancestor, while traveling through the county, was thought to have scattered a trail of words and musical notes along the line of his footprints…these Dreaming-track lay over the land as “ways” of communication between the most far-flung tribes.

The Apaches mark the life passages of women, from young to girlhood to motherhood, by singing song.

The Pueblos of New Mexico, part of the childbirth ritual requires that the woman who delivers the baby greets the infant with a song.

In Bali, Indonesia, the gong and drum are used in ceremonies to uplift and send messages.

The Australian Aboriginal and Native American shamanists use vocal toning and repetitive sound vibration with instruments created from nature in sacred ceremony to adjust any imbalance of the spirit, emotions or physical being. 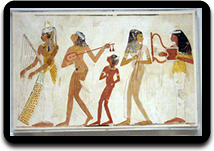 The Priests of ancient Egypt knew how to use vowel sounds to resonate their energy centers or chakras. There is a direct link between different parts of the body and specific sounds. Such a technique appears extremely old; yet healing through sound goes back even further, at least as far back as Atlantis where the power of sound was combined with the power of crystal.

Jewish mystics have long believed that every sound affects our bodies in a particular way.

Vedic seers and shamans incorporated specific hymns and chanting in their meditation and visualization practices in order to achieve a state of calm contemplation as a gateway to an altered state of consciousness.

Many cultures recognize the importance of music and sound as a healing power. In the ancient civilizations of India, the Orient, Africa, Europe and among the Aboriginal and American Indians, the practice of using sound to heal and achieve balance from within has existed for many generations.